Your Ultimate Guide To The Best Birdhouse Cameras

Birdhouses are fairly small spaces, and trying to capture footage from within a birdhouse can be quite difficult without a birdhouse-specific camera. Such cameras flaunt a wide-angle lens which enables them to give you a full view of the interior of the birdhouse you’re trying to surveil.

Shopping for a birdhouse camera can be pretty daunting, though, considering the overwhelming variety of options on the market, which is why, in this article, we’re going to highlight some of the best birdhouse cameras available on the market today, so you might want to stick around.

Birdhouse Spy Cam’s Hawk-Eye is a compact wireless camera that can deliver audio and video footage from within your garden’s birdhouse right to your computer. Thanks to its small size, the Hawk-Eye can be set up inside almost all bird boxes, no matter how small, or near a bird feeder.

Even though the Hawk-Eye is advertised as a wireless camera, it’s important to understand that it still needs to be plugged into some sort of a power source, as it doesn’t feature a battery pack due to its small size. The transmission of audio and video, however, is entirely free of wires.

You want to make sure the Hawk-Eye is near your router or range extender so that it’s easier for it to pick up the wireless signal. And if you want, you can connect audio and video cables. As far as the picture quality, it’s quite satisfactory. It’s far from high-definition, but it’s not bad at all.

The Hawk-Eye is equipped with a 70-degree wide-angle lens with night vision recording for your convenience. It also flaunts a built-in microphone that does a great job of picking up the quietest of chirps. Best of all, the Hawk-Eye is a fairly affordable camera that won’t set you back much. 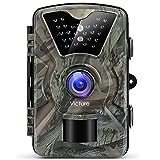 While not primarily a birdhouse-specific camera, the Victure Trail Surveillance Camera can still be used to monitor bird feeders and large bird boxes. If you’re looking to capture a lot of photos, this is the camera to opt for, as it flaunts an impressive delay time of less than half a second.

The Victure Trail Surveillance unit is equipped with a 12-megapixel lens and can record videos in 1080p resolution. Further, it offers five different modes of operation: photo, video, time-lapse, motion-capture, and photo+video, so you’re not just limited to just one type of footage.

The camera is equipped with a bunch of other convenient functionalities, including photograph timestamp, low-battery alarm, and password protection, just to name a few. It also has an IP66 dust-proof and waterproof rating, so you don’t have to worry about the effects of the weather.

Powered by eight AA batteries (not included), the Victure Trail Surveillance unit can run for up to six months. The cam is also compatible with SD cards up to 32 GB, but it doesn’t come with an SD card of its own. Last but not least, the camera is backed by a sweet one-year warranty.

The Green Feather Bird House Camera is yet another excellent product to check out if wires are not an option for you. Similar to the Birdhouse Spy Cam Hawk-Eye, however, this camera needs to be plugged into some sort of power source in order to run, as it’s not equipped with batteries.

Being a wireless unit that features a microSD card slot, the Green Feathers camera enables you to enjoy watching live footage on a computer or record directly onto the computer. Oh, you don’t have a computer? No worries. You can easily set this camera up with your smartphone.

The Green Feather WiFi Bird House Camera is one of the most compact units on this list, which is to be expected since it doesn’t have a battery pack or any serious external wiring. It flaunts an impressive 2.8mm wide-angle lens, so you’ll have a clear sneak peek inside your bird box.

What’s more, this cam is equipped with an IR filter that helps it deliver clear night-vision footage. There’s also a motion detector inside the camera which you can use to avoid recording hours of empty footage. If you’re in the USA, you’ll need an adapter, as the cam has a European plug.

The Wingscapes BirdCam Pro from Moultrie is quite similar to the Victure Trail Surveillance unit, but it features a better 20-megapixel camera, and therefore, can offer improved photo and video quality. The Wingscapes has a wide focus range of six feet and can stream 1080p videos.

It’s safe to say that this camera offers the best video quality out of all the products on our list, so if you care about the fidelity of your footage, this is the camera for you. Also, the camera runs on eight AA batteries, so you won’t need to connect it to a power source like other units on our list.

The camera relies on SD cards to store its footage. It supports microSD cards up to 32 GB. This makes it easier for you to transfer pictures and videos files from the camera to your computer or smartphone. The Wingscapes also features white LED flash technology with a 25-foot range.

There’s a lot to like about the Moultrie Wingscapes BirdCam, but there are a couple of things we have an issue with. First of all, readability isn’t all that good due to the small font size and lack of contrasting colors. And second, there’s a two-second delay when using the motion detector.

Despite its small, ultra-compact construction, the Green-Backyard Bird Box Camera offers great recording capabilities. To operate properly, the camera’s network cable needs to be plugged into your network in order to start streaming footage on a computer or a smartphone device.

One of the strongest selling points of this bird box camera is that it comes with free software for recording live feed on a computer. The power and video cables are included in the package, so you won’t have to purchase them separately, not to mention a 60-foot ethernet cable.

Again, this is one of the most compact birdhouse cameras on the market, so you won’t have any problems fitting it inside the majority of bird boxes. The IP PoE camera is equipped with a digital microphone that easily picks up crisp and clean audio as if you’re inside the birdhouse.

What’s more, Green- Backyard’s IP PoE camera is capable of recording night-vision videos with the aid of built-in infrared. And in addition to the free computer software, the camera features an extremely convenient smartphone app that you can utilize to stream the cam’s live feed.

Any of the above-reviewed birdhouse cameras will get the task done beautifully. It all boils down to your requirements, from camera placement and ease of installation to photo/video quality and cost, not to mention additional features such as night vision, timers, motion detection, and such.

If we were to crown a winner, we’d have to go with the Birdhouse Spy Cam Hawk-Eye. It’s much more affordable than most birdhouse cameras on the market yet it offers a great deal of value. If you want the best in terms of photo/video quality, the Moultrie Wingscapes is your best bet.

GoPro vs DSLR – Find Out Which One Comes Out On Top